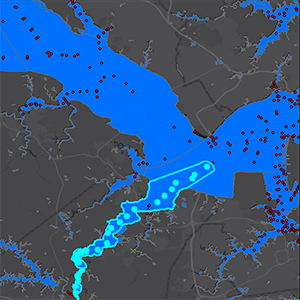 At its core, the Waterway Harmonization Project is a communication tool.

Most everyone knows the annoyance of navigating by GPS, especially in areas you already know: it calls named streets by the county road number, or mispronounces what should be common street names. These little glitches are bemusing, but don’t actually impede navigation—imagine how difficult traveling would become if one street had four or five formal names from which the GPS could choose.

Navigation would get really tricky really fast. And that is precisely the situation with which our maritime agencies are beset.

Each federal agency that deals with maritime data maintains its own set of records. For example:

Because these datasets are maintained and stored by different agencies to different naming standards, cross-agency communication can be complicated. One geographic location may have a formal name and a colloquial name. Even when a point has the same name across datasets, searching for it may be difficult due to naming standards—Mount Victoria may also be written out as Mt. Victoria, Mt Victoria, or MOUNTVICTORIA.

The original, core purpose of the Waterway Harmonization Project was to harmonize waterway place-names across federal agencies, allowing for clear and rapid communication across the federal government.

Using the NOAA Electronic Navigation Charts as a base layer, we successfully created a queryable dataset that crosswalked agency names… but realized that this project could be so much more than a clunky list of geospatially linked name data.

Thus began the next phase of the Waterway Harmonization Project.

After reviewing the available waterway geometry datasets, we settled on using the U.S. Census Bureau Areal Hydrography dataset as our starting point. It had robust, high-resolution geometry that covered all national waterways. Then the Zekiah GIS Analysts began the task of editing the waterway beginning and endpoints to accurately represent the true footprint of the Aids to Navigation (ATON) monitoring them. In most areas of the country, this required overlapping waterway polygons.

Each USCG-maintained waterway was manually examined and/or edited to ensure it accurately represented the full extent of the assigned ATON service area.

Some inland waterways (including the Mississippi, Missouri, and various intracoastal waterways) are monitored and maintained by the U.S. Army Corp of Engineers at one or five-mile level sections. The Zekiah team created one full-extent polygon for each of the USACE waterways, and then used FEMA mile markers to break the waterways into one or five-mile increments. Whilst working on the waterways, we fixed a few errors in the FEMA mile marker dataset.

After completing the segmentation and initial attribution of the inland waterways, Zekiah wrote a custom python script that populated a section name for each river segment. Ex: “Mile Marker: 160 to Mile Marker: 161”

Upon the completion of the inland waterway segmentation, the Zekiah team had a working base geometry dataset that accurately represented the footprint of each federal waterway. We next had to assign each waterway a Maritime Resource Number; a unique ID that would allow for rapid database identification. Until the Zekiah Waterway Harmonization Project, the IALA Guideline: G1143 Unique Identifiers for Maritime Resources had never actually been used to create an MRN dataset. Zekiah followed this guidance, and created a custom methodology for the creation of MRNs for navigable waterways.

The first step of MRN creation required Zekiah to write a custom scrip that set up the attribution table structure and removed all special characters from waterway names. Using the modified, human-readable waterway names, a waterway abbreviation was generated using the first three letters of each word in the waterway name: Upper Potomac River became upppotriv.

The first Managed Name Space (MNS) for each waterway was also auto-populated: all waterways that fed into the Atlantic Ocean were given the MNS1 value, “noratl” for “North Atlantic”. The waterbodies that feed into the Gulf of Mexico were populated with “gulofmex”, etc.

Once the first Managed Name Space had been populated for a waterway, the Zekiah team had (temporarily) reached a point at which custom scripting could no longer serve our purposes. All of the other Managed Name Spaces had to be filled in manually as the Zekiah Analysts followed a simple approach using a “Big water to little water” rule.  Each MNS value was populated base on how the waterways typically connect from larger water bodies to smaller ones.

MNS1: The North Atlantic > MNS2: harbor approach > MNS3: the harbor > MNS4: river that feeds the harbor > MNS5: 1st tributary of the river… and so on until the Zekiah Analysts reached Managed Name Space 12. (Note: Only a few rivers had all 12 MNS filled.)

The result is a unique string of letters that identifies and places an individual waterway. For example, the MRN for the Upper Potomac River is:  urn:mrn:iala:us:noratl:capmay:checha:potriv:upppot.

The final step of the Waterway Harmonization Project was the very task that had started it all: to crosswalk agency names across shared geometry.

The Zekiah Technical Team spatially joined each federal waterway dataset to the completed base geometry, capturing every feature that fell within each federal waterway in a one to many relationship. Plainly speaking, we found each USACE Channel Framework project or NOAA Named Feature that fell within the USCG boundaries of the Chesapeake Bay. Many secondary agency names linked to one within the USCG base geometry.

These spatially joined feature classes were exported into a SQL relational database, which maximized the data’s flexibility. The database can be linked to a web map that displays visual or text queries. The database can be queried on its own, and it allows the user to limit the source origin of the data it returns.

The Waterway Harmonization Project grew out of a communication need between federal agencies that manage maritime data. By the end of the project, Zekiah Technologies built a high resolution, national waterways dataset that included ATONIS name attribution and inland river segment numbers. Before the Waterway Harmonization Project, there was no such geospatial data in existence.

We used our custom base geometry to spatially join other federal agencies’ waterway name data to the ATONIS name data. The spatially joined name attribution was fed into a custom SQL relational database, which allows the data to be queried, exported in tabular form, and displayed in web maps. The data is the first of its kind to include unique Maritime Resource Numbers, and has a set the standard on the creation of MRNs for waterway management. The workflows we created also have the potential to be used internationally as well.

Over the course of the project, we learned that sometimes your original starting point isn’t always the best—learning through active problem solving and adjusting course as you go. Sometimes the dataset you thought was best needs to be replaced, and other times you find a more efficient workflow as you make your way through the first. In groundbreaking projects like these, all new knowledge is progress.

Refining and reiterating workflows for a national, multi-phase project required extensive living documentation. We developed our Standard Operating Procedure in concurrence with the rest of the work, allowing our technical team to work from the same set of instructions while also recording the most successful workflows for future standardization.

Our final, and in some way simplest, lesson learned is that automation isn’t everything. Each waterway in the country was physically looked at by a human analyst, and that effort and innate logic can’t be mimicked by scripts.

The effects of the Waterway Harmonization Project will be far reaching. At its most basic level, it will streamline precise communication between maritime agencies as well as facilitate communications between the government and the public. Local Notices to Mariners are issued by the Coast Guard, and they will be able to accurately display the waterway in question, the name of the waterway, and any USACE or NOAA projects affected by the Notice. The USACE will be able to more fluidly announce the location of channel dredging projects.

Once available for public download, the fully attributed waterway geometry will be useful to virtually everyone: academics studying weather or the environment, local recreational boaters, corporations looking at vessel movement, etc.

As we demonstrate the Waterway Harmonization products to federal stakeholders and the interested public, more and more use-case scenarios will become apparent. It is a first of its kind dataset, and Zekiah Technologies is proud and honored to have been a part of it.

This post was written by Christine Johnson, GIS Analyst.

Our Thanks to Our Service Members During Military Appreciation Month