Insights and News
You are here: Home1 / Insights2 / Geospatial Solutions3 / Getting Started With the Platform Independent Model – Tools and ...

So nearly everything we have discussed so far is not really useful unless we can figure a way to get it to help with what we need to do with geospatial data. It’s sort of like having the world’s greatest bowling ball with no lanes. How do we make this help us with increasing productivity, promoting sharing, reducing user frustration, and making us ‘cost competitive?’ The simple, practical answer is flexible, user modifiable applications.

What are these applications?

Making practical use of a data standard involves a number of required functions. These are:

But how is this done? While this had been done in a couple of environments, the power is doing it on the Desktop. Because a number of these items (such as 3 and 4) involve working with potentially large physical implementations which may reside in local relational databases, desktop tools remain the most practical method for validating or migrating data in place. Initial tools have already been developed by Zekiah using the PIM schema and data as well as the PIM API as the engine for performance. 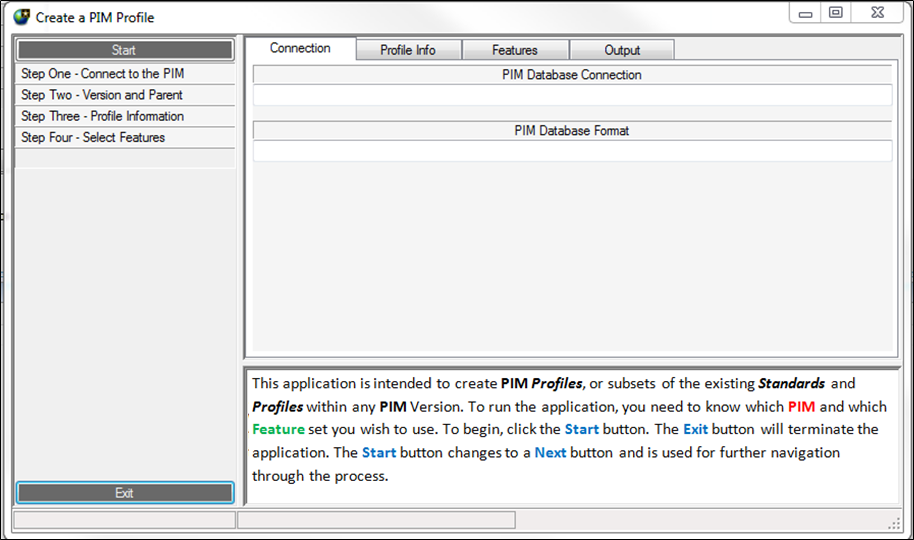 PIM Profiler – Pictured above, this application allows users to create subsets of either the entire standard or previously defined Profiles. These new Profiles can be used as feature/ attribute collections for the following additional tools.

PIM GeoDbGeneration – This application allows users to create ArcGIS Geodatabases consistent with the physical contents of the PIM. Specific versions of Esri Geodatabases require a valid ArcGIS license for that version.

PIM Validation – This application reads data exports in a variety of GIS formats and verifies that the schema and/or data content of the user dataset is compliant with the requirements of the standard and/or profile being managed by the PIM.

The following tool is also under active development:

Geodatabase to PIM – This application will examine the schema of an existing Esri Geodatabase, including feature classes, attributes, feature datasets, relationship classes, constraints and other constructs and “infer” a base PIM from the in-place physical implementation. The intent of this tool is to allow users that may already have a data structure in place to generate a baseline PIM in order to begin applying configuration control to their data model. This may be particularly useful for regional consortia or other multi-party organizations in which individual members may have in-place data structures that pre-date current collaboration efforts.

All applications make use of a ‘wizard’ format, specifying a number of steps in performing the function. The general appearance of the PIM applications are the same with the exception of the Builder and Generator. All include on-screen assistance in completing the task and a number of error checks in ensuring the PIM rules are enforced.

Over the next several posts, we will add some links to video of the applications in use. Stay tuned…

Managing Geospatial Data Models With a PIM APIZekiah Awarded Geospatial Services Contract With US Department of Homeland ...
Scroll to top