Insights and News
You are here: Home1 / Insights2 / Geospatial Solutions3 / Exploring the PIM: Versions and Users

This post will begin to introduce PIM and PIM API organization. The PIM API is coupled with the tables and views in the PIM based on the rule set discussed in the previous post.

The fundamental object (and table) in the PIM API and the PIM is the pimVersion. Each element in the PIM and PIM API is tied to a version. In the current structure, pimVersions are identified (pimVersion.ID) by a real number. The use of a real number in this context as opposed to some string value; e.g. ‘2.1.4’, is arbitrary and can be easily accommodated in small PIM revisions. 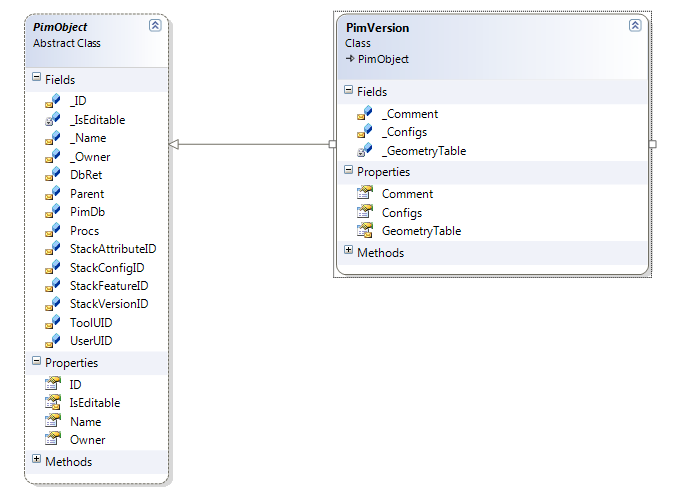 Within the PIM API there are two additional special capabilities that provide a great deal of developer power. You may recall that each element within the PIM and PIM API object model contain a GUID/UUID. These are reflected in the tables as configID, featureID, attributeID, valueID, and the PIM API as pimObject.ID. In the PIM API, these are cast to a special data type of PimID. This allows for obtaining any pimObject (pimConfig, pimFeature, pimAttribute, etc) by using either the ID with a data type of pimID or Name with a data type of string.

The other important attribute that is in every table is the userID, which is defined as a 64-bit integer (“bigint”) at the database level. The PIM can use either an internal user table or one that provides external user numbers. These typically are provided by the portal or other web interface. The purpose of the userID is to allow for custom profiles or the addition of adapted (non-Gold) elements. Those elements would be identified as having the userID associated with the user requesting those elements. Once again, the userID is in every table in the PIM and, in the PIM API, it is associated with the ‘Owner’ which is a property of the pimObject portion of every PIM API object. Within the PIM, a userID of 0 is that owner associated with Gold. All external users of the PIM should have a userID > 0.

In the next post, we’ll delve into the PIM Configuration object and explore its role in the PIM. Stay tuned…