Insights and News
You are here: Home1 / Company News2 / Clean the Bay Day with Zekiah Technologies 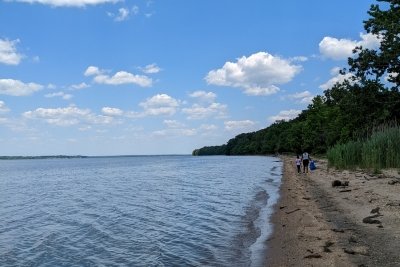 Earlier this month, Zekiah Technologies ventured to nearby King George’s Caledon State Park for Clean the Bay Day. This state-wide day of volunteering, organized by the Chesapeake Bay Foundation, has happened on the first Saturday of every June since 1989, with litter and debris pick-up happening in many of Virginia’s riverside and bayside parks.

Organizers of the event estimate that an approximate 65,000 pounds of litter was picked up from 250 miles of Virginia’s shoreline on Saturday. Zekiah team members Emily and ND can personally vouch for their combined 22 pounds of that litter!

Caledon State Park was once property of the Alexander family (the same family that founded the city of Alexandria). Their descendants donated the property to the commonwealth in 1974. For a time, it was a designated natural area because it was home to bald eagles, which were an endangered species. Thanks to the eagles’ resurgence in population and the removal of their endangered status, Caledon is once more a state park.

If you were unable to partake in Clean the Bay Day but are still interested in helping out, not to worry! Not only does the event happen annually, but Chesapeake Bay Foundation has some helpful DIY suggestions for how to help keep the commonwealth’s waterways clean year-round.